“Can we do a better job of encouraging and practicing civil dialogue to help us get past political or idealogical differences and find common ground on solutions? Can more of us think on longer time scales in our decision-making and planning, rather than being stuck in short time scales that are irrelevant to environmental change? Can we allow ourselves to be open to making more drastic changes that may seem inconvenient in the short term but are essential for a livable, desirable future - and can we make those changes equitably? Can we break out of our sectors and cross-pollinate our ideas better, so we are working more collaboratively and holistically on solutions? To achieve a desirable future for our environment and communities, we have to believe can do all of those things - and actually do them. “
- Jenny Seifert, Science Writer, Outreach Coordinator, Water Sustainability and Climate Project, University of Wisconsin-Madison

“If I could paint a picture of what this would look like in 75 years, it would contain ribbons of green (our farms, open spaces, parks, trails, etc.) and blue (lakes, rivers, wetlands, etc.) intertwined and functioning in harmony with the diversity of residents, businesses, and communities that make Dane County unique.”
- Sara Rigelman, Acquisition and Planning Specialist, Dane County Land and Water Resources Department - Parks Division 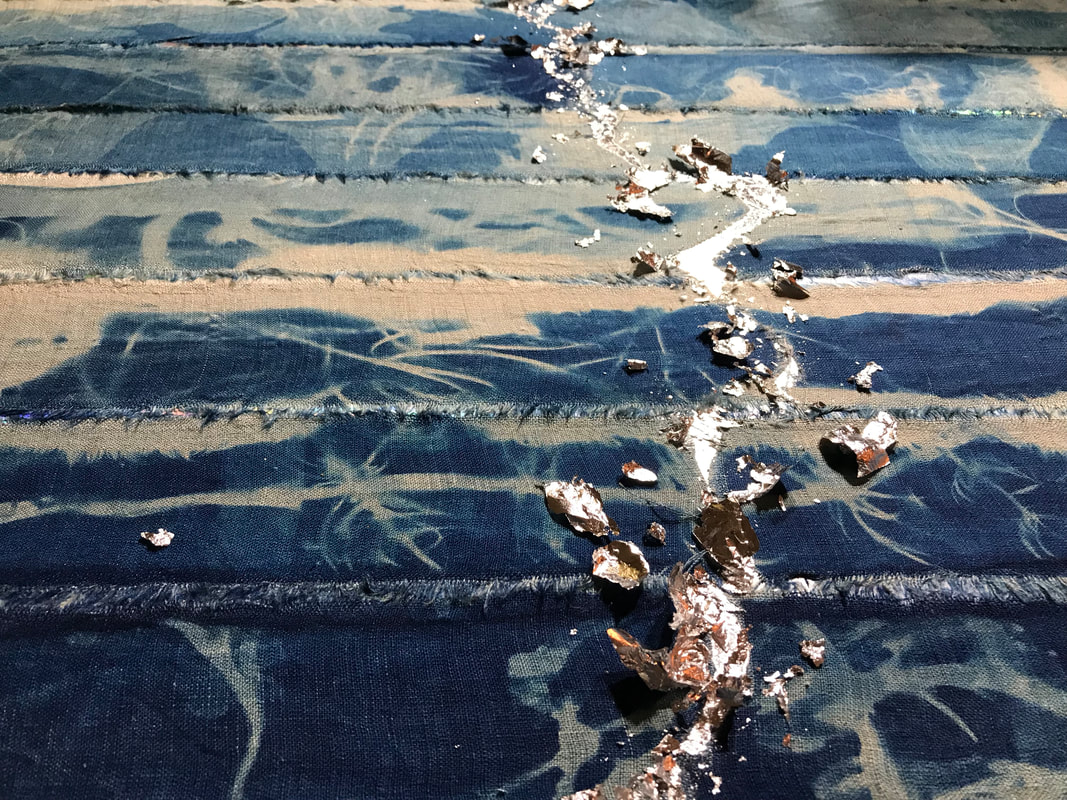 Flora
Cyanobacteria - blue green algae that can be harmful or lethal to humans and other species. A recent bloom of cyanobacteria in June of 2017 turned the Yahara River and Lake Mendota near Madison’s isthmus bright blue green, creating a dead zone that killed fish, crayfish and waterfowl in its wake. The Water Sustainability and Climate Project at UW-Madison explored potential futures for water, ecosystems, and people in the watershed in Yahara 2070. This project lays out a set of four fictitious but plausible scenarios about the watershed in the year 2070. It incorporates scientific knowledge, public participation, computer models, stories, and art. In the scenario Abandon and Renewal, a deadly airborne cyanotoxin caused by a blue- green algae bloom causes a number of people to become sick and die and many people to flee the area.
Eutrophication - lakes and rivers become enriched with nutrients like nitrogen and phosphorus that are critical for the development of plant and animal life. Excess eutrophication caused by fertilizer run off from farm land can lead to thick mats of algae, scum, foam, foul oder and death and disease in fish populations.
Lake weed - aquatic plants that thrive in fresh water bodies suffering from excess eutrophication. Species include bushy pond weed, coon tail, water foil, and water star grass.

​Fauna
Beaver - Beavers build dams on rivers and streams and lodges that help protect them from predators by creating a body of still deep water to surround their homes. The building practices of the beaver differ from human building practices in that they create wetlands and habitat in which other species can thrive.
Catfish - The Yahara River was once known as the Catfish River of the Four Lakes Region.Yahara comes from the Ojibwa name for catfish, one of the many species of fish that inhabit the lakes.
Daphnia - native zooplankton, or tiny, floating creatures that live in the lakes and eat algae. They are threatened by Spiny Water Fleas which eat them and thereby increase the algae in the lakes.
Elephant - In one of the four Yahara 2070 scenarios, Abandon and Renewal, the watershed becomes home to a community of elephants escaped from the abandon Vilas zoo. The elephants thrive in the warmer climate and mark the return of a species related to the mastodonand wooly mammoth that once roamed this place during the last Ice Age. Yahara 2070 is a research effort of the Water Sustainability and Climate Project at UW-Madison that explores potential futures for water, ecosystems, and people in Wisconsin’s Yahara Watershed. Yahara 2070 entails a set of four scenarios about the Yahara watershed in the year 2070, which incorporate scientific knowledge, public participation, computer models, stories, and art.
Humans - Humans have lived here for thousands of years. The Skare site, located on the Yahara River between Lake Waubesa and Kenosha, is dated as early as 9,000 B.C. Humans have left their mark on the watershed in many ways:
Mounds - Prehistoric peoples marked this place with mounds of earth. Effigy mounds take the shape of animals, humans or spirits and once covered the Yahara Watershed, which was the center of the effigy mound building culture. Many of the mounds that early European settlers observed and mapped have been destroyed but many have persisted and are still visible in places like Bear Mound Park, Woodland Park, Cherokee Marsh and the grounds of the Mendota Mental Health complex.
Oak Savannas - European settlers noted that the native Ho Chunk people cultivated oak savannas They did this by periodically burning back the prairie grasses and allowing the naturally fire resistant oak to trees to thrive, creating shade and an open understory under which to gather. The oak savanna and the ubiquity of the mounds indicates that the Madison area was an important gathering place long before the city was laid out as the state capitol by European settlers.
Swimmers - Local beaches close regularly due to algae blooms and unsafe water conditions. The ability to safely swim, fish and boat in the Madison lakes is of great concern to people in the watershed, who want their grandchildren and great- grandchildren to be able to enjoy the lakes as they did.
NOAA (National Ocean and Atmosphere Administration), with scientists at UW Madison have worked to predict how extreme rainfall, a byproduct of human-caused climate change, may effect the city of Madison. The results show flood waters that could split the isthmus in half, close the airport and take s long as 10 days to recede. The mapped results of flood waters look strikingly similar to the maps of the Glacial Lake Yahara.
Unicyclists - Unicycling represents a challenge that can be accomplished with tenacity and deliberate practice, focusing on keeping all your parts balanced on a single point to move across a landscape. It represents a positive metaphor for working together on a single issue and moving it forward.
Wind Turbines - A great way to generate energy without contributing to climate change, wind turbines and other technology are used to solve many climate related problems in the Yahara 2070 scenario Accelerated Innovation.
Mastodon - This extinct species once roamed midwest during the last Ice Age. The mastodon skeleton in the collection of the UW Madison Geology Museum that has been on display since 1915 comes from two animals unearthed in the southwest Wisconsin towns of Boaz and Anderson Mills in 1897 and 1898. Its a reminder of the larger implications of a changing climate.
Spiny Water Flea - a non-native zooplankton, or tiny floating creature that lives in the lakes and feeds on native zooplankton like Daphnia. Spiny Water Fleas originally came from Europe or Asia. The population that now lives in lake Mendota eats as much Daphnia in 7 years as the weight of the entire human population of Madison.
​Geography
Glacial Lake Yahara - A single large body of water that filled the Yahara watershed after the glaciers receded, covering much of that we know. This lake would contain “Picnic", “Marquette,” “Atwood,” “Olbrich,” and “Tenney” islands and a “Capital” peninsula instead of the landscape we are familiar with now.
Ice Age - The glaciers began to recede at the end of the Ice Age, about 12,000-13,000 years ago. This region was close to the edge of the Green Bay lobe of the Laurentide Ice Sheet. As the glacier began to melt the Yahara valley was filled with a single glacial lake.
Nested Watersheds - all water flows to the lowest point in a basin.
Each watershed, or basin, is made up of smaller watersheds nested
inside. One of the of four fictitious, but plausible, scenarios in the project Yahara 2070, Nested Watersheds, envisions a new way of governing: by using watersheds instead of politically drawn boundaries as a way to protect resources.
Springs - The Yahara river and the Madison lakes are fed by springs. Native cultures found springs to be holy places that provided a link to another world. To be surrounded by so many springs highlight the auspicious nature of this place. 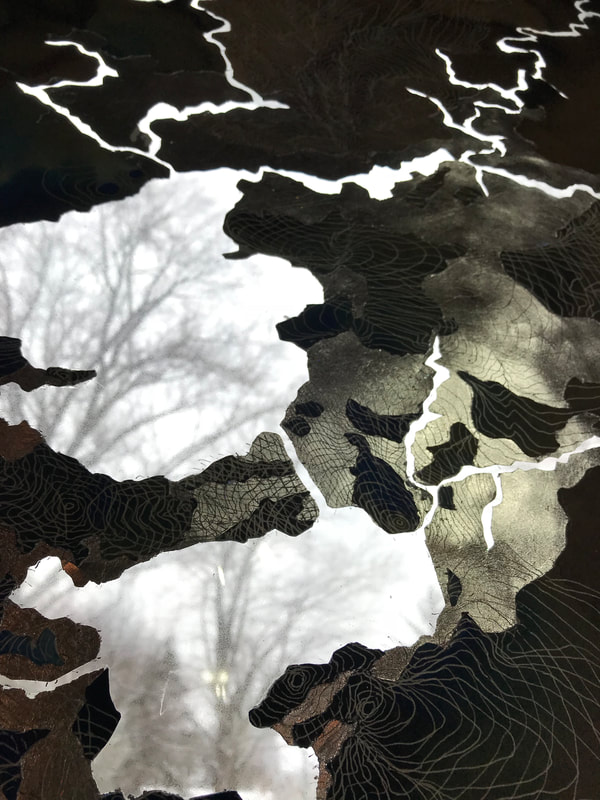